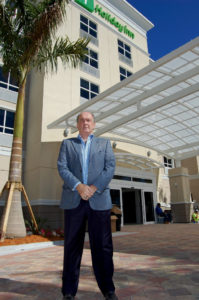 Fred Hirschovits stepped out of a silver Mercedes-Benz and strode toward his hotel, the Holiday Inn Fort Myers Airport at Town Center, like an ambassador from the land of graciousness and good taste. The Cornell University hospitality school graduate — one of the world’s most highly vetted programs — walked up to a woman idling outside and asked in his Finnish accent, “What can I do for you, ma’am?”

Left: Phil Hugh at Hotel Indigo in the downtown Fort Myers River District. Below, Fred Hirschovits at the Holiday Inn Fort Myers Airport at Town Center. “Will all the rooms and everything be ready?” asked Fort Myers resident Nancy Pit, who was looking for a place for four members of her family to stay. They would be in town from Los Angeles the first week of February.

“It looks like it won’t be, but trust me, it will be ready,” said Mr. Hirschovits.

In case she wasn’t convinced, he let her have a look at the lobby, where construction workers added finishing touches, and check out a few of the 169 rooms where her family might stay. After learning Mr. Hirschovits owned it all, she commented, “It’s a big investment.”

There are good reasons for that. Many hoteliers like him went ahead with developments they planned before the economy slid into recession, and as a result are forced to open during a time when people might travel less in general. In addition, Lee County visitors will have at least 12 new hotels to choose from beginning this year, including the new Holiday Inn scheduled to open Feb. 3, all in all totaling an estimated 1,350 rooms.

Mr. Hirschovits, CEO of Naplesbased Twenty/Twenty Worldwide Hospitality LLC with partner James W. Field, is betting his experience and expertise will keep him ahead of competitors. He has spent the last three decades running hotels in Europe and the United States; including one in Tennessee, and the Hampton Inn & Suites in Cape Coral. He also picked an experienced team for the Holiday Inn. Managing Director Brian Holly was managing director at the four-diamondrated Sanibel Harbour Resort & Spa for 17 years.

But as Mr. Hirschovits told Ms. Pit, in a tone of voice mastered by many a seasoned maitre d’ and hotelier, which implies both confidence and humility, “I’ve been in the hotel business 35 years. I guess I know how to make a bed and mix a martini.”

“You know what? You’ve got a wonderful location,” she told him. “My heartiest best wishes.”

“I believe strongly in this corridor,” he said.

He also utilized his familiarity with European hotels to bring some stylistic touches to the Holiday Inn. For example, there are “pods” from which clerks are free to move out from behind, greeting guests as they enter instead of a front desk, which could be considered imposing. Mr. Hirschovits expects more than half his guests to be groups and conventions, so designers built in various rooms totaling 7,000 square feet of meeting space.

Still, some question if the number of visitors to the area will be sufficient to fill up all those beds.

“Thirteen hundred (new hotel rooms) is a lot,” said Nancy Hamilton, a spokeswoman for the Lee County Visitor & Convention Bureau. “It’s a lot of growth, especially when you look at the economic times that we’re in, but it gives us an opportunity to welcome more guests. It’s a lot of competition and I think everybody will be working very hard in the next year.”

Although figures were not available for the average number of hotel rooms that open up each year, 1,350 is not an overwhelming number in Mr. Hirschovits’ opinion.

“It’s the same quantity, but we’re in different times,” he said. “Two years ago, it would have seemed OK.”

Hotel Indigo, which is nearing completion in downtown Fort Myers’ River District, will only be taking up 67 of the new rooms opening in Lee County this year. But each is custom designed and offers the feel of being in the center of things because the windows look out over downtown: the Federal Courthouse, the enormous banyan tree in front of the Lee County Commissioners’ building, the Caloosahatchee River, the salsa-colored parking garage or any combination thereof.

“This is a very unique, one-of-a-kind project,” said owner Phil Hugh. “It’s a truly high-end boutique hotel, with our own custom design.”

The color scheme is a blend of whites, light blues, indigo and wall-size floral murals in 14 different varieties of guest rooms, all with hardwood floors. Valet parking will be available at the entrance to the Post Office Arcade on Broadway Street. It will also serve as an entrance to the hotel and the hotel’s restaurant, Vino de Notte, offering casual Italian fine dining.

Hotel Indigo is a boutique brand launched by Intercontinental Hotels Group, although owners like Mr. Hugh add their own touches. This is the first Hotel Indigo in Lee County. Mr. Hugh has developed other hotels and retail stores, such as the Holiday Inn, downtown historic district in Fort Myers, and others in Pennsylvania and Wisconsin.

He made plans to build Hotel Indigo in 2005, the same year he formed DOC Corp, the umbrella organization for his developments.

“We started before the economy went south,” said Mr. Hugh. “There’s a pent up demand (for a hotel) in downtown. We think we’ll open up pretty strong. I’m not extremely concerned about the hotel performing well; we just need to get it open.”

With the Ambassador Hotel (the 24-story riverfront hotel near the yacht basin) now closed, Hotel Indigo is the only one downtown. It cost about $15 million to build from the ground up to the seventh story, where a swimming pool and spa will sit on one end and a bar on the other, offering expansive, panoramic views of downtown and the river.

Room rates may start out at about $200 per night and the hotel is slated to open near the end of February.

One of the greatest challenges to building the Indigo, Mr. Hugh said, was working in a tight, busy space. It was built on a small vacant lot nestled between the Federal Courthouse, law offices and the Post Office Arcade when construction began in 2007.

“We worked hand in hand with the historic district research group to get a look that was acceptable to us,” Mr. Hugh said.

Prior to forming DOC Corp., Mr. Hugh was senior vice president of franchise sales and development for Cendant Corp., where he was a key figure in growing the Wingate Inn brand.

He has 18 years in hospitality industry experience, starting as a night auditor at the Pittsburgh International Airport Days Inn and moving on to general manager of a 144-room hotel in Ohio.

At Hotel Indigo, wall-sized murals designed by Terry Tincher, owner of Space 39 Art Gallery in downtown Fort Myers, will be strategically added throughout. Mr. Tincher selected old postcards to blow up and transferred the images to wallpaper.

“I used historic images for the theme,” he said,” which is The City of Palms (Fort Myers) as a historic travel destination.”

I was fortunate enough to cross paths with Fred Hirschovits, Founder and CEO of Twenty/Twenty Worldwide Hospitality, LLC, back in 2004. Since that time,… Read More