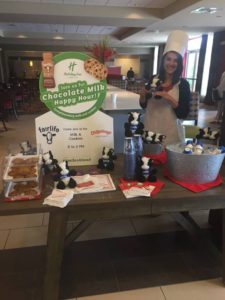 The brand, owned by InterContinental Hotels Group, launched Summer of Smiles, an extension of its Smiles Ahead marketing campaign. More than a way to increase business to its owned and franchised hotels, the project also reminds hotel owners and operators the value in paying attention to even the smallest guest.

AAA reports family travel is a big deal in the U.S. as more than one-third of Americans plan to take a family vacation this summer. Most families (70 percent) plan one or two vacations, and the 28 percent that plan three or more trips is a 13 percent increase over last year.

The key to getting families to include your hotel in their travel plans is to be kid friendly.
“I learned a lot while traveling with my son. Some hotels rolled out the red carpet and others looked down on us,” said Brian Holly, general manager of the Holiday Inn Ft. Myers Airport at Town Center in Fort Myers, Florida, a hot spot for amateur sports teams and tournaments such as Little League.
The Fort Myers hotel already sharply focuses its services on children and parents, so Holiday Inn’s Summer of Smiles campaign is a natural fit at the 169-room property.

Raul Ortiz, director of brand marketing for Holiday Inn, said 20 Holiday Inns in the U.S. are participating in the Summer of Smiles. Ortiz said the company will analyze the response as well as the financial impact of the program with a mind toward creating new standards for the brand in future years.

Meantime, the hotels participating in the campaign can see first-hand whether the attempt to surprise and delight guests makes a difference.

Ron Wilson, general manager at the Holiday Inn Resort Pensacola Beach, Florida, said he was not enthusiastic about the happy hour at first. But he was sold on the first day when the line snaked around the lobby. “We ran out of cookies and milk the first day,” he said. “The second day, we increased supply and had just enough.”

Both the Pensacola and Fort Myers hotels hold their happy hour during check-in, and it has proven to be a bonus for guest satisfaction scores.

Holly said when tired parents finish checking in at the front desk and then turn around and see the milk and cookies, “it gets the stay off on the right foot.”

The GMs said their properties are already family focused, but they continually welcome new ideas to maintain the high level of happiness and satisfaction.

Holly said after his personal family travel experiences, he decided to elevate his hotel’s guest service and attract business generated by local sports tournaments by specifically catering to children and their parents. The market, one of the busiest for amateur sports events in the country, is highly competitive.

“I realized parents turn these trips into mini-vacations,” Holly said. “I asked the housekeeping team what they thought, and hands went up. We don’t have enough towels in the rooms. There is not enough for kids to do on property. After a long day, parents aren’t happy about having to make up the pullout sofa bed every night.”

Holly took his team’s advice. In addition, the hotel has coolers packed with iced drinks for sports teams as well as a card in each room thanking the guests for choosing to stay at the hotel during the tournament. In the evenings, the hotel has “dive-in” movies, where kids can watch a family-friendly feature film while floating in the pool, and parents can relax in the outdoor bar and lounge. In the banquet room, bigger kids can plug in their video games, play basketball and munch on snacks.

Wilson said the Pensacola hotel is the first property built specifically for Holiday Inn Resorts and had families in mind from the beginning. But meeting the needs and exceeding the expectations of travelers with children is an ongoing strategy.

“We have quite a reputation as a kid-friendly hotel,” Wilson said. “We not only embrace children, we do things to draw them, to make parents choose us.”

On deck at the pool are staff dressed as pirates and mermaids. Poolside, the hotel has a lot of games such as giant Connect Four and corn hole boards; it has a lazy river and a children’s pool. And it has new activities every day. “First thing in the morning, moms and dads will stop by the front desk and ask what we plan for the children that day.

“Holiday Inn’s Summer of Smiles campaign blends in really well with what we try to do.”

The Scholastic book event has not kicked off yet, and Wilson said he will gauge the campaign’s boost to business at the end of the season.

Wilson is in his fifth season at the Holiday Inn Resort Pensacola. He goes by seasons, not by years. While summer is still a very demanding time, Wilson said, “the dynamics of the beach season are changing; people are coming year ’round. We are 50 percent busier in February than we were five years ago.”

Spring and fall school breaks also are getting longer, stretching the season from one week to two or three. More families are including travel as part of the break.

While Holiday Inn attracts both business and leisure travelers, the bleisure trend, which sees travelers adding a weekend stay to their trip and bringing their spouse and children along, means hotels have to let guests know they are both business and family friendly.

At the Holiday Inn in Fort Myers, Holly said the hotel does its “share of corporate business, too.” But when it comes to attracting families, he offers this advice: “We have learned if you can make Mom happy, then everybody is happy; and they will come back to your hotel.”

During my tenure with the City of Knoxville, I had numerous contacts with Fred Hirschovits, who at the time was General Manager of the… Read More