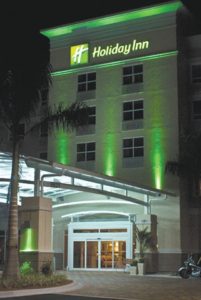 What would you say about a new hotel that has already hosted several large groups, accumulated an impressive guest list and has already received repeat business – while still weeks away from its April 15 grand opening?

That’s what’s happening at Holiday Inn Fort Myers Airport@Town Center, at 9931 Interstate Commerce Drive in Fort Myers, which is exceeding expectations in the first month of operations – in spite of the economy.

“We ended up our first month really much better than we thought we would, business-wise,” he said. “A couple of things happened in the month – last minute – that we were not anticipating.”

Just a day and a half after opening, the hotel received a call looking for rooms for a government group – 123 rooms, to be exact, that were quickly booked for five nights. That group was President Obama’s Advance Team, and it included security, Secret Service and a communications team from the White House, ahead of the president’s Town Hall meeting at the Harborside Event Center.

Holly said it was a great start for the first week in business.

“It really got us off and running much quicker than we anticipated,” he said.

The Holiday Inn also received unexpected business from distressed passengers from Southwest Florida International Airport due to both weather and mechanical troubles. Holly says their sales team has lined up agreements with the airlines to funnel stranded air travelers to the hotel. An agreement has also been established for crew members laying over in Southwest Florida.

The Holiday Inn also welcomed several sports teams that were in town for a baseball tournament at FGCU, as well as several softball teams.

We are building the business. We have a great offer and a great product.

“We are really pleased with the first month,” said Fred Hirschovits, owner and developer of the new Holiday Inn, as well as president and CEO of Naples-based Twenty/Twenty Worldwide Holiday Inn lobby Hospitality LLC. “The second month is going quite well also. We are building the business. We have a great offer and a great product.”

While that extra business was not anticipated, it is in line with the game plan for the hotel. Owners and managers are hoping to capitalize on its location near the airport and FGCU to attract teams, travelers and business groups.

“When you plan a hotel you plan it for certain reasons,” Hirschovits explained. “This hotel was planned for the biggest growing area. South Fort Myers is the strongest corridor in Southwest Florida. Yes, there is a beach here, and people come here – and if people come here to vacation, some people might stay with us, yes. And we are going to have travelers right off the interstate and so on and so forth. But this hotel was not built for the beach. It was built for groups, meetings, business needs and leisure of course.”

It is that distinction in target clientele that Holly says is sparing the hotel from the economic crisis plaguing so many in the various hospitality industries across the region.

Going for the groups

According to Holly, the Holiday Inn Fort Myers Airport@Town Center provides options for people accustomed to a certain level of service but are now forced to re-evaluate their budget.

“When you talk to the owner, he’ll tell you he has nerves about opening in this economy,” Holly said. “But from the operator’s standpoint, I think the hotel is positioned nicely.

“If people cannot afford the high end or the Sanibel properties, we have the meeting space, the event space to do nice-sized weddings, and the venue with water view rooms, meetings rooms and so forth, to do those kinds of businesses for those people that are a little bit more budget conscious, and also people who don’t want to put four star properties on their expense account right now. They want a nice property but they want to be mindful of the economy and their own current corporate economy. They will get the service and amenities they get in the upscale brands.”

Hirschovits acknowledged the market is a concern, but said their formula works.

“It’s tough; the universal global economy is tough,” he said. “We have to fight for the business, try to outsmart, outsell the competition. You are not going to get every piece of business. We are trying to go after certain groups. We have 7,000 square feet of meeting space and that is why we are going after group business, association business, corporate business and so on and so forth.”

The Holiday Inn is, in a sense, a hybrid between luxury and what is affordable right now. The hotel’s trade is expected to be comprised of about 60 percent group and 40 percent social reservations. Holly says it is all about filling a niche market.

“Call me crazy, but that is why I am optimistic,” he said.

The strategy is clearly working. With just one month under its belt, the hotel is already experiencing repeat business. Holly says it all started with the stranded passengers from the airport.

Hirschovits said the staff reports a high level of guest and visitor satisfaction.

“When people come in, they can’t believe this is a Holiday Inn,” he gushed. “The Twins’ third baseman came in to stay for a couple of nights, and said it felt like a four-star hotel. I know we are a top product for the value we have. It’s amazing.”

The great product Hirschovits is referring to is a “Prototype Holiday Inn” – of which only a handful are open across the country. The design comes from a new European formula that, among other upgrades, has replaced the front reservation desk with podiums. The podiums are designed to put friendliness at the forefront of service.

Aside from a great staff and a continental floor plan, the hotel has several upscale amenities that will also appeal to people living in Southwest Florida. The hotel has an indoor/outdoor lounge area called Oasis by The Lake, which includes a fire pit. The restaurant’s head chef is from Sanibel Harbor Resort & Spa, and the entire south side of the hotel features a waterside view of Lake Alico.

Appearances aside, a busy opening month, an impressive guest list and repeat business ahead of the official grand opening are clear indications the Holiday Inn Fort Myers Airport@Town Center has indeed found the right market and location – even if it is miles from the beach.

Fred was involved in the development and opening of the 300 room, high rise, Holiday Inn World’s Fair Hotel in Knoxville, Tennessee. He was… Read More